By Andrew R.C. Marshall for Reuters on March 14, 2014—
“Police rescued about 200 people believed to be Muslim Uighurs from a human smuggling camp in southern Thailand, police sources said on Friday, in the latest crackdown on a burgeoning trafficking network in Southeast Asia.

The latest trafficking victims, possibly from China’s troubled far-western region of Xinjiang, brings the total number of people freed from human traffickers to well over 800 since Reuters exposed the whereabouts of the illegal camps in a December 5 investigation.

The raid is further evidence that human smugglers in southern Thailand – already a notorious trafficking hub for Rohingya boat people from Myanmar – are exploiting well-oiled networks to transport other nationalities in large numbers, despite an ongoing crackdown by Thai police.

“The human smugglers are expanding their product range,” said Police Major General Thatchai Pitaneelaboot, who has launched a series of raids on trafficking camps in southern Thailand, including the 200 rescued on Wednesday.

In Washington, U.S. State Department spokeswoman Marie Harf said, “We do welcome reports that a group of approximately 200 Uighurs were rescued by Thai police from a camp in which they were being held.”

“We are urging the Thai Government to provide full protection to the victims to ensure that their humanitarian needs are met, and continue to urge and encourage Thailand to conduct thorough investigations for signs of trafficking, including in cases with alleged government complicity,” Harf said.

Two police raids in January, based on information provided in the Reuters investigation, freed a total of 636 people. At least 200 of them were Bangladeshis – an “unprecedented” number, said Thatchai. 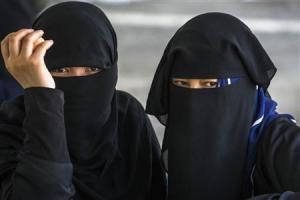 Suspected Uighurs from China’s troubled far-western region of Xinjiang, look on inside a tempora …

The rest were Rohingya, mostly stateless Muslims from western Myanmar, where deadly clashes with ethnic Rakhine Buddhists in 2012 killed at least 192 people and left 140,000 homeless. Since then, tens of thousands of Rohingya have fled from Myanmar by boat, many of them coming ashore in southwest Thailand.

The Reuters investigation in December reported that Rohingya were held hostage in illegal camps hidden near the border with Malaysia until relatives paid ransoms to release them. Some were beaten and killed. The investigation also found that Thai authorities had adopted a covert policy to push Rohingya detainees out to sea – and back into the hands of human traffickers – because police immigration detention camps were overwhelmed with new arrivals.

CLAIM TO BE TURKISH

The suspected Uighurs were discovered on Wednesday night in a hilly rubber plantation in an area where the Reuters report identified at least three camps used by Rohingya smugglers last year. The camp guards fled as police approached, Thatchai said.

Those rescued included at least 100 children, most of them toddlers or still breastfeeding, and a pregnant woman. They now sit on plastic mats in a parking lot at the regional immigration headquarters – the nearest police detention center is too full of Rohingya and Bangladeshis to accommodate them. Police say the

group claims they are Turkish, although they have no documents to prove that.

The group in Hat Yai shows strong similarities to Turkic-speaking Uighur asylum-seekers who have been detained in Bangkok, police sources say. 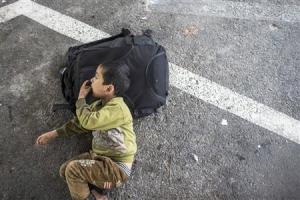 A suspected Uighur from China’s troubled far-western region of Xinjiang, rests on a ground insid …

In a possibly related incident, Malaysian police arrested 62 people who had illegally crossed the porous border between Thailand and Malaysia on Thursday, the New Straits Times newspaper reported. They also claimed to be Turkish, although it is highly unusual for Turks to seek asylum in this way.

Unrest in China’s Xinjiang has killed more than 100 people in the past year, prompting a crackdown by Chinese authorities. Many Uighurs resent restrictions on their culture and religion, and complain they are denied economic opportunities amid an influx of Han Chinese into the province. Many Uighurs refer to Xinjiang as East Turkestan. The region came under Chinese control following two short-lived East Turkestan republics in the 1930s and 1940s.

Thai police are struggling to officially identify the group detained in Hat Yai. So far, none of them has spoken more than a few words of Arabic, even to local Thai Muslims who have arrived to offer help.

Their silence is only broken by the mewling of children. They all have fair, Caucasian features and the women wear headscarves which leave only the eyes uncovered.

“These people will refuse to acknowledge Chinese citizenship to avoid being forcibly repatriated,” said Kayum Masimov, president of the Montreal-based Uyghur Canadian Society. “They will simply refuse to talk. They fear for their safety.”

Masimov spoke by telephone to the man identified by police as the group’s leader and said he understood the Uighur language. The leader gestured toward men not to talk when Reuters approached them. 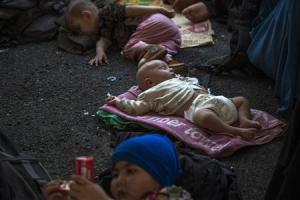 Children of suspected Uighurs from China’s troubled far-western region of Xinjiang, rest on a gr …

“The leader says who can talk and who cannot talk,” said Thatchai, the police major-general.

The 200 people in Thailand were part of what Masimov called an “unprecedented” exodus of Uighurs from western China in recent years. “We have never had so many people leaving our homeland,” he said.

A Chinese diplomat had arrived to assess the situation, while Turkish officials were en route from Bangkok, police said.

Thatchai said he planned to move the women and children into a meeting room inside the headquarters. Many of the suspected Uighurs were growing impatient. “They’re under pressure,” he said. “They want to go somewhere but they don’t want to go back to China.”

In 2009, 20 Uighurs were deported from Cambodia to China despite the objections of the United Nations and human rights groups, who said they faced lengthy jail terms upon their return..

At least 100 Uighur men, women and children are being held at an immigration detention center in Bangkok, part of a small but growing number arrested for illegally entering Thailand, most likely overland through Laos from southwest China.

The United Nations refugee agency would not confirm the identity of the people detained in Hat Yai.

“We understand a large group of people were rescued after a smugglers’ camp was raided (in Thailand),” said Babar Baloch, a spokesman for the UNHCR. “We have a team there to assess their urgent humanitarian and any protection needs.”

Malaysia, a Muslim-majority nation with a chronic shortage of labor, is often the ultimate destination for growing numbers of Asian migrants and asylum-seekers who are falling prey to human trafficking rings.

On March 6, Reuters reported that human traffickers had held hundreds of Rohingya Muslims for ransom in houses in northern Malaysia. Their graphic accounts of abuse suggested that trafficking gangs had shifted their operations into Malaysia as Thai authorities cracked down on jungle camps on their side of the border.”
For the original article, please click here.