“…easily the greatest feature film ever made about American slavery.” ~ David Denby, The New Yorker 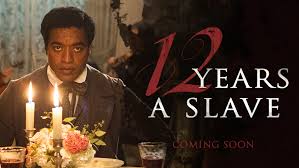 See this highly acclaimed film (95% Tomatometer), 12 YEARS A SLAVE, “a British-American historical drama film, a fictionalized adaptation of the 1853 autobiography Twelve Years a Slave by Solomon Northup, a free black man who was kidnapped in Washington, D.C. in 1841 and sold into slavery (Wikipedia).” We will have a discussion forum after the film.

ABOUT FILM | The film is adapted from the 1853 memoir by Solomon Northup, who had been a free black man in upstate New York. A husband and father, he was a literate, working man, who also made money as a fiddler. But in 1841, after being lured to Washington, D.C., with the promise of several days’ work fiddling with the circus, he was kidnapped into slavery. Over the next 12 years before finally winning his freedom, he became the property of a series of different plantation owners — one who was especially cruel and brutal (NPR). FILMMAKERS | Steve McQueen III (Director), John Ridley (Screenplay), Hans Zimmer (Music), Joe Walker (Editing), Sean Bobbitt (Cinematography), and PRODUCERS: Brad Pitt, Dede Gardner, Jeremy Kleiner, Bill Pohlad, Steve McQueen, Arnon Milchan & Anthony Katagas CAST | Chiwetel Ejiofor, Michael Fassbender, Brad Pitt, Benedict Cumberbatch, Paul Giamatti, Sarah Paulson, Paul Dano