“Invisible Offenders: A Study of Online Sex Customers,” a study concluded this month by a team of researchers from ASU’s School of Social Work, Office of Sex Trafficking Intervention Research with assistance from the Phoenix Police Department, developed a model to estimate the number of customers contacting online sex advertisements.  This model was applied by placing decoy online sex ads on escort services classified websites in fifteen cities.  The ads received 677 contacts, calls and texts and the researchers collected distinct phone numbers of 451 online sex ad customers.

Population estimates were created for all 15 cities with Phoenix having an estimated 78,412 online sex ad buyers with a range from Houston with 169,920 to San Francisco with 9,594.  The researchers created a probability estimate for each city using this number and found that on average, approximately one out of every 20 males over the age of 18 in a metropolitan city area is potentially soliciting online sex ads.  The findings ranged from approximately one out of every five males in Houston, (21.4%) or using a more conservative estimate of 13.8%, one out of every seven males, to less than one of 166 males in San Francisco (.6%).

This study was funded by Thorn: Digital Defenders of Children and led by Dominique Roe-Sepowitz, an associate professor and Director of the Office of Sex Trafficking Intervention Research, along with her research partner, Lieutenant James Gallagher of the Phoenix Police Department’s Vice Enforcement Unit and the STIR office research team. The team placed decoy ads online in 15 cities at two different times to collect information about calls and texts from potential online sex buyers.  The cities, all of whose police departments were made aware of the study included: Atlantic City, Boston, Baltimore, Chicago, Houston, Kansas City, Las Vegas, Miami, Minneapolis, New York City, Phoenix, Portland, San Diego, San Francisco and Salt Lake City.

According to the authors, the purpose of this study, the first of a series on prostitution demand, was to contribute to the field of demand research.  The intention of this study is to inform law enforcement, advocacy groups and policy makers about the scope of this illegal behavior and to begin a dialogue about how to best integrate this new information into the demand reduction activities currently being implemented.  This study should be viewed as a first step in an ongoing attempt to understand the “demand side” of the sex industry.

“This research will assist law enforcement to address gaps in operational knowledge as to the scope of demand, the increasingly technological nature of solicitation, and the impact of demand as a driving force in the sex trafficking culture.   As a tool to facilitate greater understanding for law enforcement, knowledge such as this will prove to be essential as we continue to provide victim centered services through proactive investigations and strive to hold all victimizers, both traffickers and john’s, accountable” said Lieutenant James Gallagher.

The researchers used an ecological sampling technique called capture/recapture, which has been used for sixty years to estimate the density of wildlife populations and more recently for drug use and diabetes rates in specific geographic areas.  Using this sampling and modeling method, the study created a probability estimate for the total size of the online sex ad customer population based on the exposed male population in 15 U.S. cities. “We currently know very little about the scope of the demand for sexual services online. This study represents a much needed effort in using quantitative and statistical methods for estimating this population” said Lauren Martin, PhD, Director of Research at the Urban Research Outreach Engagement Center of the University of Minnesota.

The below table provides the percentage estimates and population count of male solicitors of online sex ads. 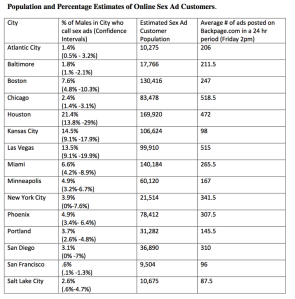