Director Megan Griffiths shines a light on a sinister corner of the American experience with this highly emotional and harrowing true-life story, winner of the Golden Space Needle Award for Best Actress at SIFF 2012. 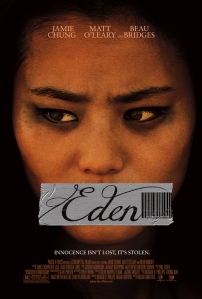 ABOUT THE FILM | Based on the true-life story of Chong Kim, a victim of human trafficking in her teenage years, Eden puts a spotlight on the chilling problem of human sex trafficking in America. The film begins in a New Mexico bar where teenager, Hyun Jae, accepts a free drink from a handsome young man who offers her a ride home. But she never reaches home and is instead thrown into the trunk of his car, and smuggled into Nevada where she is imprisoned in a storage facility-turned-brothel. Hyun Jae is renamed Eden by her captors, and learns what the rest of her life will entail: sex with strangers, making porn films and fighting for survival. She is quick to make a tight bond with another enslaved worker and wakes up to the fact that they both must escape at any cost.